How to Study for PMP Exam and Pass in 2.5 Weeks – Sulagno’s Story 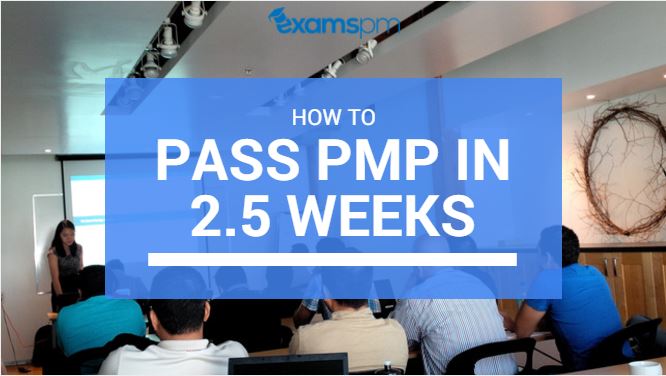 Sulagno Das Chowdhury is a senior BA/team lead working out of Cognizant Technologies’ Houston office. Like many of you, he wanted to get PMP certified to advance his career and take on new challenges. Here’s his story on how to study for PMP exam and pass in just 2.5 weeks.

He filled in his PMP application in July 2016 and was approved to write his exam. However, due to work constraints, he was only able to enrol in ExamsPM’s PMP training and start studying on March 18th 2017. He passed with 3 ‘moderately proficient’ and 2 ‘proficient’ only 2.5 weeks later.

Here is his exact study plan.

Like many PMP aspirants, when Sulagno read the PMBOK for the first time, he had no idea what he just read. He found the guide dry and unintuitive.

However, when Sulagno watched the lectures from ExamsPM to understand the context, reading the PMBOK the second time made a lot more sense.

Sulagno did not use any additional study material (e.g. Rita’s or Head First) because he found that the study material started to repeat itself. He limited the amount of study material he used so that he can use the least amount of effort to pass as quickly as possible.

Tip #1: Watch the lectures first. Then, reinforce your understanding by reading the PMBOK.

Sulagno studying every night for 3-4 hours plus the weekends. He did not request study leave from his job. He found that fitting all his studying within a short time span allowed him to retain more information.

The point of the PMP exam is not to test your memorization skills. PMI wants to make sure you understand project management concepts and methodologies that will make you a better project manager in real life.

It is more important to understand how the PMBOK works. A good way to do so is to turn the ITTOs into a story. In this way, you can add a lot more context to a dry diagram.

You can learn how to turn ITTOs into a story by attending the free PMP training from ExamsPM.

Sulagno used a variety of memory aids, acronyms, and tricks to speed up his learning process.

For example, he saved the process chart “phone number” in his phone and called it a few times until he had it memorized.

He also used acronyms such as BIRD to help him remember the 4 information gathering techniques (Brainstorming, Interviews, Root cause analysis, Delphi techniques) and phrases such as “take a Check Collection Form and Carry it to Hawaii Public School” to help him remember the 7 basic question tools (Cause and effect diagram, Control charts, Flowcharts, Checksheets, Histogram, Pareto chart, Scatter diagram).

Tip #4: Take the free PMP course from ExamsPM to learn more of these tips.

Before his actual exam, Sulagno took 2 out of the 12 full length exams available to all ExamsPM’s students. He also did some free practice questions found online.

By just taking the prep course from ExamsPM and reading the PMBOK, Sulagno was able to pass his PMP in just 2.5 weeks!

After Sulagno obtained his PMP, he immediately started implementing some of the project management concepts he learned on his real projects at Cognizant.

Here’s what Sulagno has to say in his own words, “I found the PMP exam to be conceptual rather than directly from the books. The PMBOK mentions a lot of definitions and  terminologies; but ExamsPM tutorials explained those definitions in further details along with real life examples and case discussions. Since the exam comprised of questions related to case studies followed by questions such as ‘what should have been done’ or ‘what should be done next’, it became easier for me to apply the concepts that I learnt in ExamsPM tutorial.

Finally, the exam is definitely lot easier for those who have played the role of Project/ Team Lead or Project Manager in real life.The exam is all about applications rather than definitions and taking a logical approach than memorizing the PMBOK.”

Want to learn how you can get PMP certified in 6 weeks? Register below for a FREE class to learn how!

Taking your PMP exam from home- What you need to know!

COVID-19 and the PMP exam- What you need to know!